I did it! 6.2 miles, 1:00:33...not quite the sub-1:00 I was hoping for, but OK I guess for the first time. I think I could have pushed myself a little harder, but I wasn't sure how I'd do. It was already 80 by 6 am, and by race time it was even warmer and thick with humidity. Just as the gun fired, though, cloud cover rolled in, and though it wasn't cool, it was much better.

The first half went pretty easy for me. My breathing wasn't as labored as it normally is from practically the start. I consciously tried to pace myself, and when I checked my time at the 5K mark, it was 28:27...which is good for me. The second half was tougher. I felt OK, just concentrated on putting one foot in front of the other. I passed the two people I knew and stayed ahead of them for the remainder of the race. That was a good feeling. I did walk for a few seconds at the 4 and 5 mile water stops. I can run with a cup of water, but I didn't care to spill gatorade all over my clothes.

Once we got to the half mile left sign, I started feeling excited: Hey, I can do this!! and picked it up a little. Should've done that earlier. It was weird. Legs felt pretty good, breathing was good, I was just hot. I know I had more in me than I gave...could've met that hour goal today, but oh well.

I had initially told my husband he'd be plenty safe if he and Jr. showed up 50 minutes into the race. After reading some running blogs last night and seeing the difference between 5K and 10K times, though, I told he he'd be OK as long as he was there in an hour. Well, technically that was true, but he ran a little late and was still parking when I crossed the finish line. Oh, well...how many pictures do I need of my sweaty self gasping for breath as I stumble towards the finish? :) 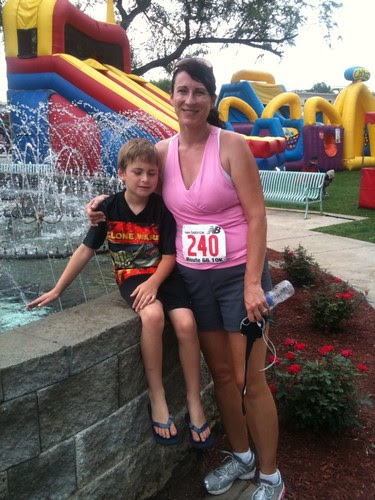 When does that runner's body kick in?