In no certain order... 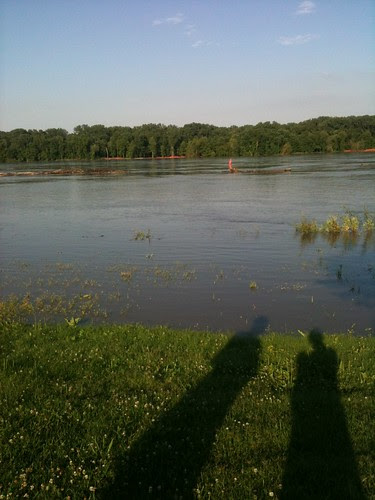 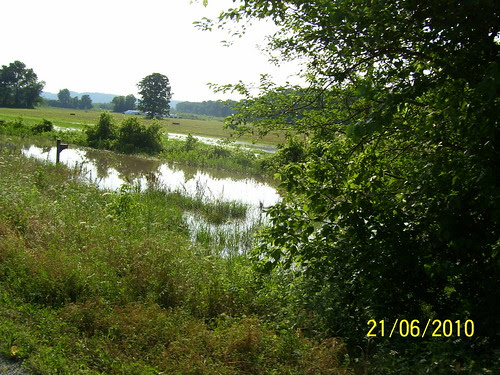 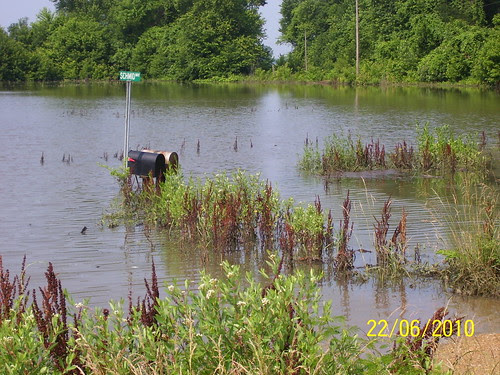 "Look how high the river is!"

Some version of those words must've been said about 30,000 times over the course of the week. Much of the Katy Trail runs near the Missouri River, and flooding along the river affected the ride. Twice we had to take detours. The first, on day 3, required us to be bused around the area affected by flooding. The other time we had the option to take a road route around the flooded section.

For the riders, the flooding was just an annoyance or inconvenience. For the organizers, it was a huge headache. Because of the rapidly changing nature of things, they had to wait until the day before that day's ride to make a decision. They had to have alternate transportation and routes prepared. They had to pay for additional buses and trucks to move riders and bicycles. And they did it with a grace that was impressive. All of the ride staff was unfailingly pleasant, helpful, and organized. I really can't say enough good things about them. :)

To recap, last year I overpacked a bit. Here is a picture of all the clothes I took that I didn't use. 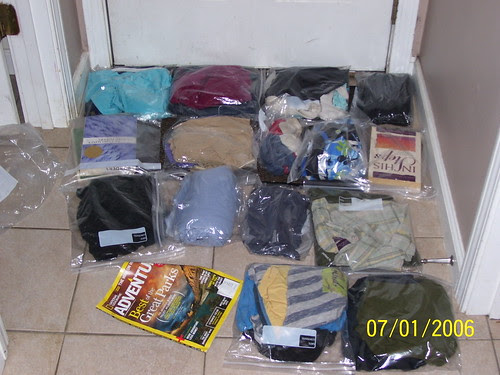 That's an awful lot of extra weight to carry around. We're limited to two 50-lb bags for clothes, tent, etc., and we have to carry them from the baggage truck to our campsite. After last year, I was determined to do better. And I did.

Here's what I didn't use this year: 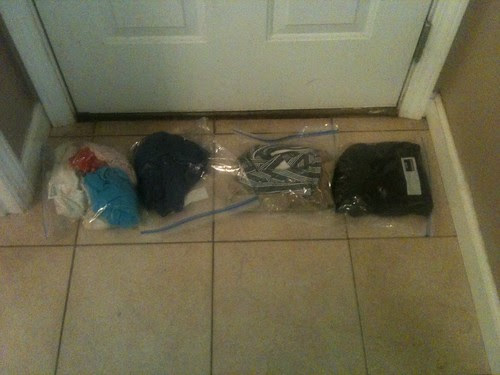 And I wore an outfit or two twice, so I could have used some of this other stuff.

Oh, and I never used my sleeping bag, either, but we'll file that one under...

A) If you go camping when the forecast is for temps in the mid-90's and have limited space in your luggage...Perhaps a big, bulky sleeping bag rated for temps in the 30's isn't the smartest thing to bring.

B) If you've been lugging said sleeping bag around for 3 days, the weather forecast shows rain and cooler temperatures, and you have no additional blankets...Perhaps you should think twice before sending the sleeping bag home with your uncle.

C) I gained 5 pounds on this trip. Yes, I rode about 225 miles last week and gained 5 pounds. I did the same thing last year and went into this trip fully intending to do better...but, you know, salad just doesn't cut it when you're riding 30+ miles.

It was an awfully hot first four days (counting Sunday in St. Charles). Temperatures in the high 90's, heat index topping out at 107. And yet, I felt pretty good riding. Some helpful hints:

I was a little worried about how this trip would go since I had so few miles on the bike this year. I was definitely saddle sore, but overall I was pleasantly surprised by how I felt. I really thought my riding partner would be leaving me in the dust (and gave him permission to do so :D), but I kept up just fine. I felt really good.

The heat didn't bother me as much this year as it did last year, either. Last year, I was dumping bottles of cold water on my head at each stop. I handled the heat much better this year, and I don't think we left much later last year than this year. This year's mileages were a bit lower, though, which may have been the difference.

I'm a lot fitter than I was last year. I don't know the weight difference, can't see it a whole lot in the pictures, but I felt much better and stronger. Last year I can remember Sam having to tell me to slow down because I couldn't carry on a conversation as we rode; this year, that was only a problem the couple of times I got behind because of getting a drink and had to try and catch up with a group that was cruising. That's not progress that you can give a number to, but it sure feels good. :)