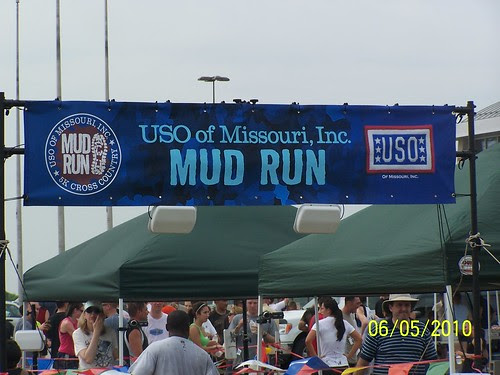 What a blast! I've never run cross country at all. I stick to roads because, though they may be harder on my joints, they're pretty consistant. After tearing my ACL 10 years ago, I'm not eager to reinjure a knee, so I'm leery of unever ground. How do you pass up a mud run, though? You don't, of course. 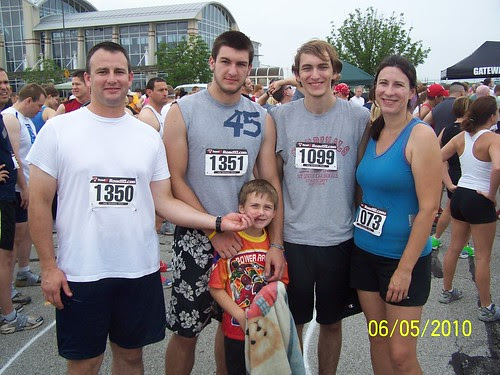 My brother and two oldest sons ran also. My husband and Jr came to play paparazzi. 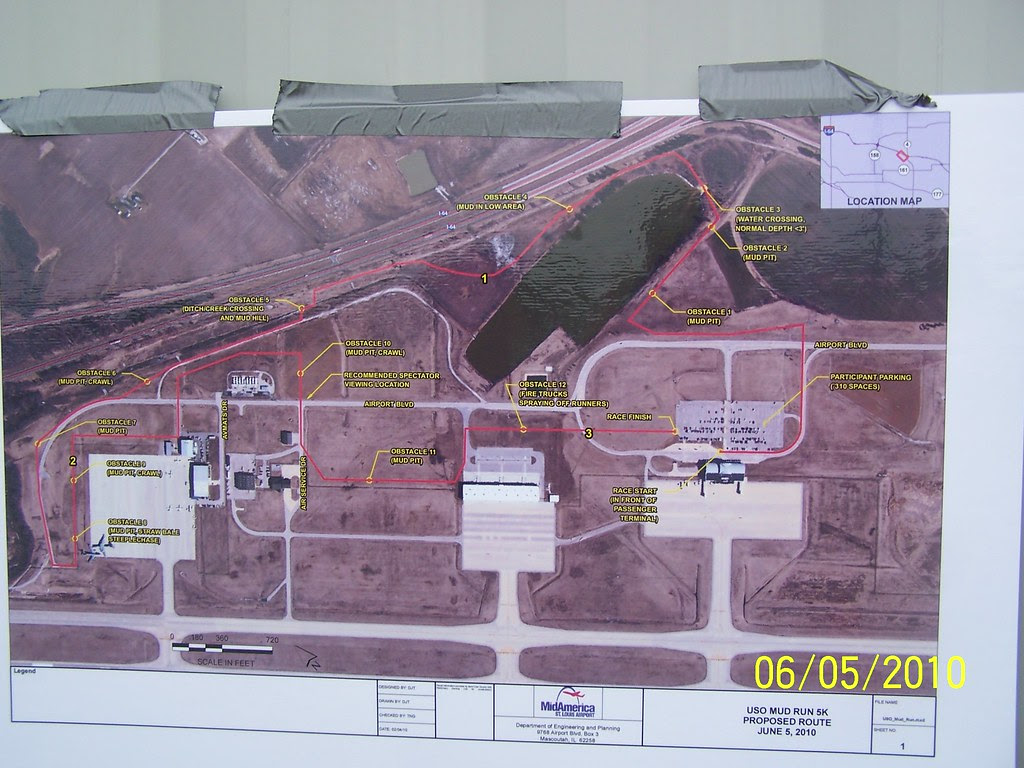 Here's the course map with the obstacles marked. It looked really long to me when I saw it mapped out. 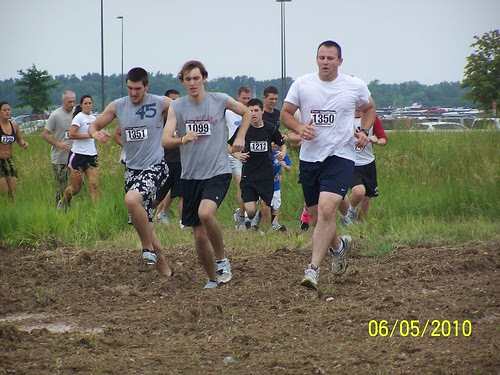 The boys and my brother in near-perfect unison. I, of course, was way behind them by this point. 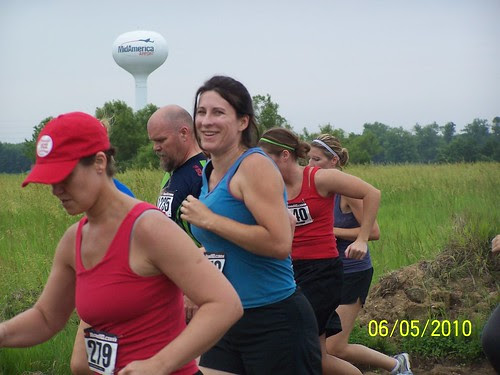 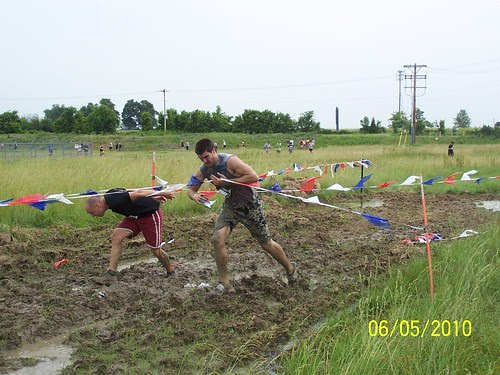 There were two or three water crossings and several mud pits, including a few you were supposed to crawl through. A lot of people did with Jocko is doing here. I crawled. The whole point of the run was to get muddy. Really muddy. Of course, after running through the mud, you came out with your shoes loaded with it and then ran through the newly cut grass. It felt like I was growing my own mud bricks on my feet! 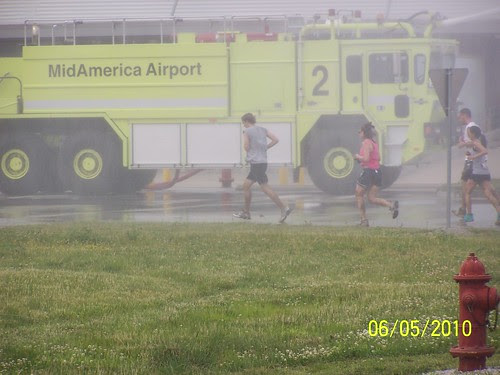 Here's Hamlet running through the fire truck spray towards the end. It felt great. The temperature was in the 80's, but it was super humid, and there were no water stops. 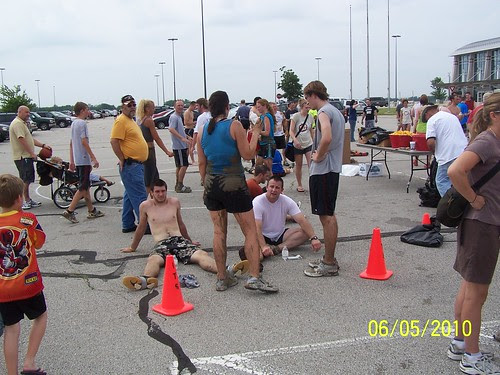 Jocko and Cappy are sitting because they beat us back by 5-ish minutes. You can tell where I wiped off my muddy hands. 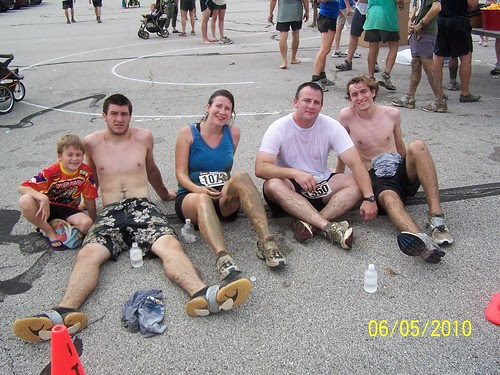 Our official "after" picture. Chip times, from left to right: 29:21 minutes, 35:29 minutes, 30:55 minutes, 35:09 minutes (yep, Hamlet only beat me by 20 seconds). As a sidenote, Hamlet told me that the only thing that got him to start running again was the thought of me beating him. Glad I am such a good motivator. I've taken enough crap from Jocko that I'm going to have to start pushing myself more because I'd love to beat the tar out of him. Still....how do you beat an athletic 15 year old who's in non-stop training for one sport or another? 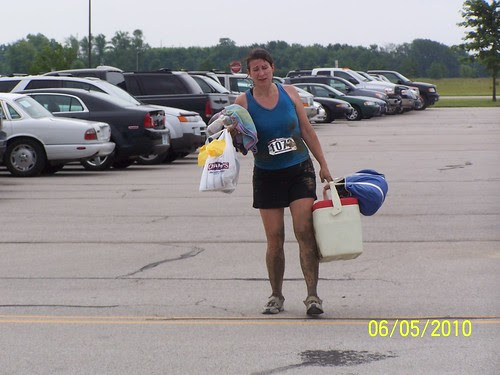 We rode to the race with Cappy, who had to work afterwards, and back with my husband who came a little later with Jr. to take pictures. So I had my paparazzi, but I needed a sherpa, too! My lovely children, two big strong teenage boys, left me to carry all of our stuff back from Cappy's truck. 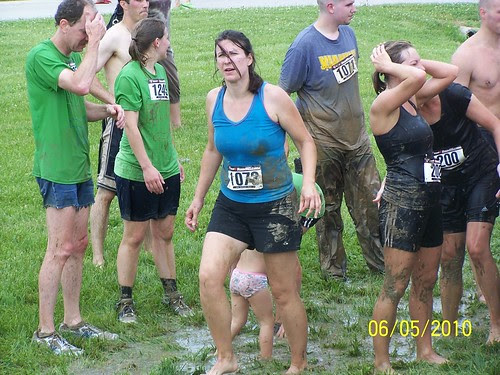 Standing in my "bathtub". The line for the hose was too long, so I just rinsed off my legs in the puddle. The green team shirts behind me were cute. Their team name was "Mud Pi" with the pi symbol. If my husband's boss didn't sponsor our mud volleyball team, we might have to steal that name. 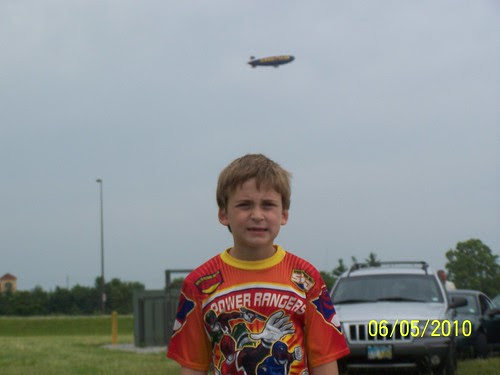 The Goodyear blimp even flew by. Pretty cool.

So my running for the week comes to a very unimpressive 8.2 miles, but I had my first cross country experience and it was good.
Labels: 5K running